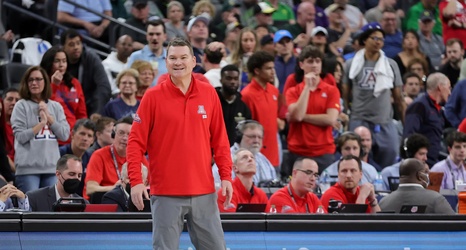 College basketball season is a mere three months away, which means ESPN bracketologist Joe Lunardi is back to work projecting next year’s NCAA Tournament.

Lunardi slates Arizona as the No. 5 seed in the West region, a modest prediction after the Wildcats lost three NBA draft picks from a season ago. Arizona would play Drake in the opening round, then presumably face No. 4 seed TCU in a Round of 32 rematch (yes, please).

If the Wildcats were to get past TCU, they would likely play No. 1 seed Gonzaga in a Tommy Lloyd - Mark Few reunion.