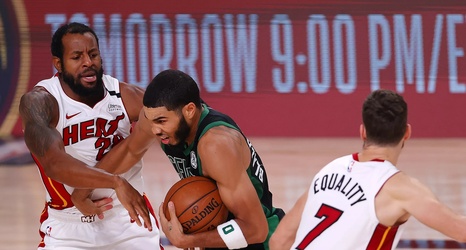 The Miami Heat will have to wait at least one more game to reach the NBA Finals. They fell to the Celtics 121-108 in Game 5 on Friday as Boston cut its series deficit to 3-2.

The Celtics outscored the Heat by 20 in the second half.

Andre Iguodala and Solomon Hill both played for Miami but didn’t have much to show for in. In 19 minutes, Iguodala had two points, four rebounds two blocks and an assist. He also picked up a technical foul for this hit above the shoulder:

Hill had three rebounds and two assists in seven minutes, only his second time appearing for the Heat this postseason.