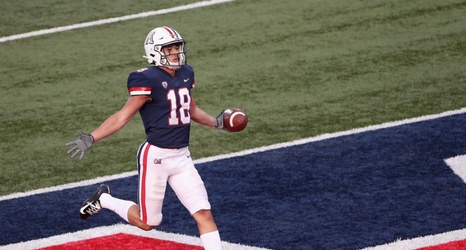 TUCSON, ARIZONA - NOVEMBER 02: Wide receiver Cedric Peterson #18 of the Arizona Wildcats scores on a 35 yard touchdown reception against the Oregon State Beavers during the second half of the NCAAF game at Arizona Stadium on November 02, 2019 in Tucson, Arizona. (Photo by Christian Petersen/Getty Images)

With the Arizona Football team soon kicking off their season against the Utah Utes, the Wildcats will finally have a day game to start the year.

The 2020 Arizona Football season is nearly here, and already it seems we may finally have some good news as the Wildcats will have a day game to start the season.