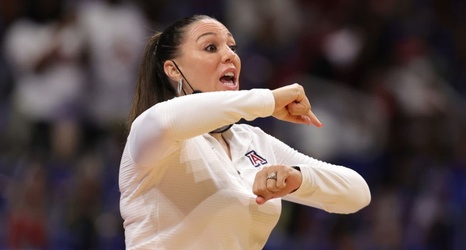 SAN ANTONIO, TEXAS - APRIL 04: Head coach Adia Barnes of the Arizona Wildcats yells to her team against the Stanford Cardinals in the National Championship game of the 2021 NCAA Women's Basketball Tournament at the Alamodome on April 04, 2021 in San Antonio, Texas. (Photo by Carmen Mandato/Getty Images)

Following a terrific 2020-21 season for the Arizona Women’s Basketball team, the ABOR has approved yet another raise for head coach, Adia Barnes.

Arizona Women’s Basketball head coach Adia Barnes is building something special in Tucson, and after a season in which she led the Wildcats to their first National Championship appearance, naturally, she is seeing an immediate payoff, literally.