Aari McDonald and Trinity Baptiste get first taste of WNBA 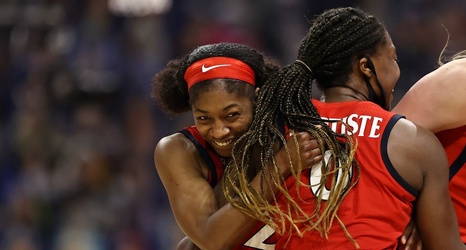 Just a month ago, Aari McDonald and Trinity Baptiste were experiencing the NCAA national championship game. Saturday, they both spoke about their early experiences in the WNBA.

McDonald got her first taste of playing against real opposition as the Atlanta Dream and Minnesota Lynx scrimmaged in Atlanta on Saturday afternoon. The two teams played a regular first half, which Atlanta won 42-36. In the second half, they played alternating possessions. The final score was 69-61 in the Dream’s favor, meaning they took the second half 27-25.

For the most part, both head coach Nikki Collen and McDonald were pleased with her performance.