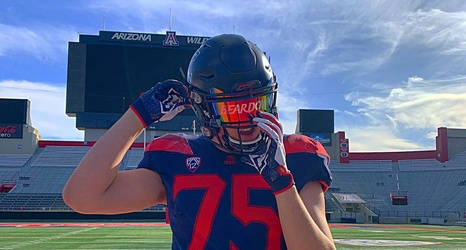 Recruiting Arizona has been an early priority for the Arizona Wildcats under new head coach Jedd Fisch, and that effort paid off Monday when they landed a commitment from three-star offensive lineman Jaxon McBride.

The 6-foot-7, 305 pound tackle attends Casteel High School in Queen Creek. Though he will join the Wildcats as a preferred walk-on, he is considered the No. 35 player in Arizona, per 247Sports.

McBride also had an offer from NAU and drew interest from UCLA and Ole Miss. He becomes the third offensive lineman in Arizona’s 2021 class.