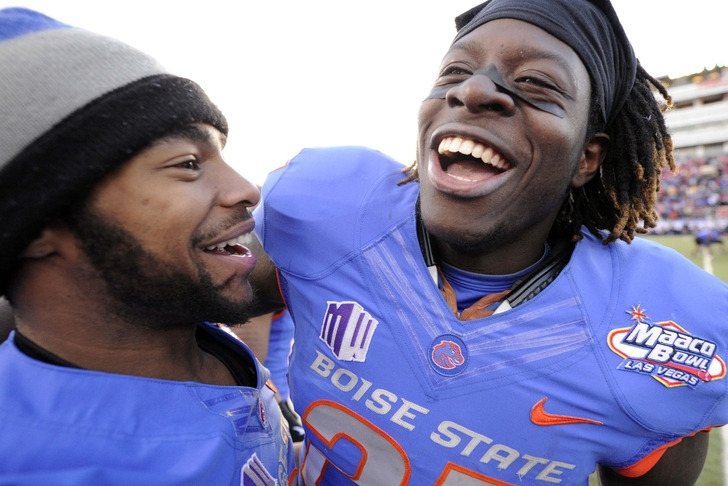 The Boise State Broncos' offense was absolutely electric at the opening of the team's Fiesta Bowl matchup with the Pac-12's Arizona Wildcats on Wednesday, even harkening back to the game that announced them as national players - a 43-42 stunner over the Oklahoma Sooners in the 2007 incarnation of the Fiesta Bowl - by breaking out the old 'Statue of Liberty' play to take a 21-0 lead on the Wildcats.

Arizona would fight back and make it a one-score game in the 4th, but BSU would hold on for their third-straight Fiesta Bowl win, 38-30.

Down 8 with the clock having dwindled to less than 5 minutes to go, Arizona QB Anu Solomon got the Wildcats offense clicking, moving them to the Broncos 35.

However, Solomon would throw four straight incompletions from there - three intended for sophomore WR Cayleb Jones - a huge moment for BSU's defense with the momentum seemingly on Arizona's side.

BSU would make it count, tackling Solomon in play with time expiring on a desperation Wildcats drive to seal the thrilling victory.

Arizona's defense allowed a season high for both points (31) and yards (397) in the first half, while giving up 11 plays of 15 yards or more.

Split the award three ways between QB Grant Hedrick (24-of-34, 309 yards, 1 TD, 1 INT) and RB Jay Ajayi (22 carries, 134 yards, 3 TDs), and WR Thomas Sperbeck (12 catches, 199 yards). As they've done all year against defenses in the Mountain West, the three took turns decimating the Wildcats' defense in the first half en route to 31 first-half points for BSU.

It goes to the Wildcats' "Bear Down" defense in the second half, shutting out the potent Broncos offense (BSU would score on an INT return for a TD) over the final 30 minutes and helping pull Arizona back into the mix in this one.

The 12-2 Boise State Broncos could very well find themselves with a top-15 ranking to finish the year, giving them plenty of momentum in their quest to bust the New Year's Six once again in 2015.

Arizona, on the other hand, finishes at 10-4 with the loss - still the first ten-win season for the program since the 1998 squad finished 12-1.