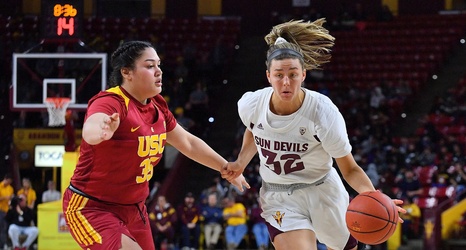 After two wins to start the Sun Devils’ 2020-21 campaign, the team was getting set to face-off against Saint Mary’s in the final game of the weekend event. Among those not on the floor in uniform, was then-junior forward Jayde Van Hyfte.

Van Hyfte only appeared in the team’s first game against Steven F. Austin five days earlier, where she had three points on 1-4 shooting in 16 minutes of action.

After the 62-53 win on Nov. 30 without her, head coach Charli Turner Thorne said that Van Hyfte would undergo knee surgery and miss the remainder of the season.