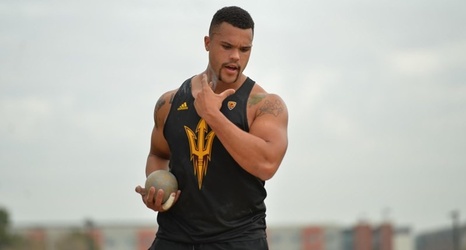 EUGENE, Oregon - For the second time in 2021, Turner Washington is a national champion!

Arizona State opened the NCAA Championships at Hayward Field in Eugene, Oregon today in a big way. Washington threw 21.10m/69-2.75 in the third round of the shot put to win the national crown and give ASU it's second NCAA title this year. The Sun Devils also celebrated Jamar Marshall Jr. advancing to the final round of the 110m hurdles after finishing fourth overall in the semifinals. Carlan Naisant finished 19th in the javelin.

This is Washington's second NCAA shot put title in 2021.