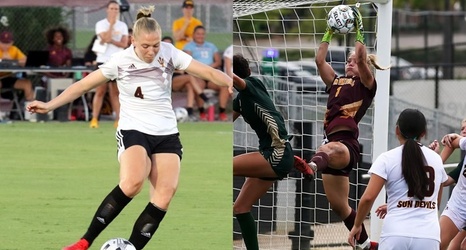 TEMPE, Ariz. – Sun Devil Soccer's Lieske Carleer (defensive player of the week) and Birta Gudlaugs (goalkeeper of the week) both earned weekly Pac-12 honors as announced by the conference office on Monday.

Both players played big roles in helping the Sun Devils remain unbeaten (4-0) after capturing road wins at Mississippi State (1-0 on Thursday) and at UAB (5-1 on Sunday).

Carleer played all but seven minutes of the two games and contributed to a defensive effort that allowed a single goal including a shutout at MSU and conceded only 13 shots in two games.