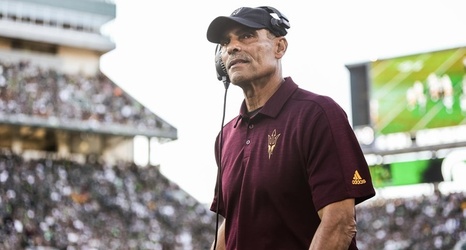 ATLANTA (Sept. 17, 2019) - Arizona State head football coach Herm Edwards has been selected as The Dodd Trophy Coach of the Week, officials from the Bobby Dodd Coach of the Year Foundation and Chick-fil-A Peach Bowl today announced on Tuesday.

The Dodd Trophy Coach of the Week award honors a football coach who led his team to a significant victory during the previous week, while also embodying the award's three pillars of scholarship, leadership and integrity.

Edwards led the Sun Devils to a 10-7 upset of No. 18 Michigan State in East Lansing on Saturday.