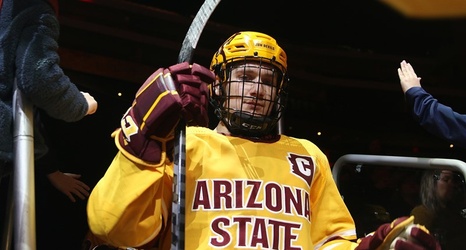 TEMPE, Ariz. – Sun Devil Hockey senior defenseman Brinson Pasichnuk has become the second player in program history to agree to terms on an NHL contract, as he and the San Jose Sharks reached an agreement on a three-year, entry-level deal Monday. Pasichnuk will become the first Sun Devil to ink an NHL deal as a free agent.

The co-captain ranked third in points among national defensemen this season with 37 in 36 games, and second nationally in goals scored with 11. Pasichnuk was also the first and only Sun Devil in program history to reach the 100-career point milestone with 107 in his four-year career.