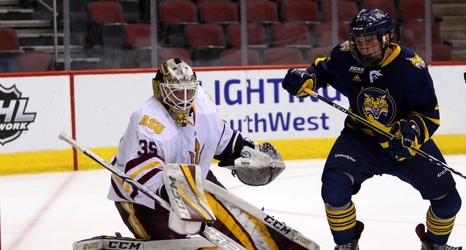 Arizona State is playing in its first-ever NCAA Tournament game this Saturday against the Quinnipiac Bobcats.

Quinnipiac hails from the Eastern College Athletic Conference (ECAC). They won their conference regular season title with a 25-9-2 overall record and a 14-6-2 clip in conference play. However, they were bounced by Brown University in the ECAC Quarterfinals. Nonetheless, due to their solid regular season, the Bobcats were a lock for the postseason.

Quinnipiac is coached by Rand Pecknold, who is in his 24th season at the helm in Hamden, Connecticut. He is currently third in wins among active NCAA Division I coaches.