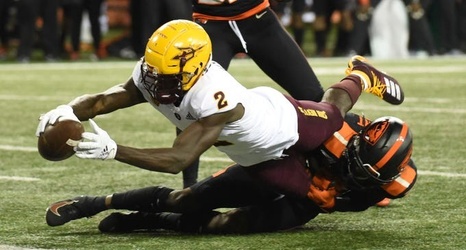 Some pundits and football fans were second-guessing Arizona State football coach Herm Edwards for going for a two-point conversion rather than kicking an extra point late in the Sun Devils' 36-34 loss at Oregon State. But Edwards isn't second-guessing his decision. In fact, he said he would make the same one again.

The Sun Devils got in striking distance when freshman quarterback Jayden Daniels hit Brandon Aiyuk on a 12-yard toss with 1:40 left to cut the deficit to 35-34. Edwards and offensive coordinator Rob Likens made the decision when the drive first started that they would go for two if they scored.