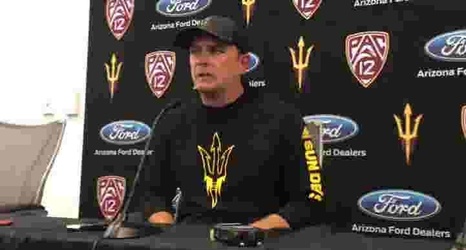 ASU DC Danny Gonzales: "If you're not arrogant or stubborn, there's nothing you're not willing to try." Jeff Metcalfe, azcentral sports

Arizona State football coaches are willing to do most anything to start faster Saturday against No. 6 Oregon and beyond.

The only thing we know that's been vetoed is defensive coordinator Danny Gonzales' idea of having a live scrimmage during pre-game warm-up.

"I've never been around a group that started so slow so we're going to change some pre-game stuff," Gonzales said Wednesday. "I asked coach, let's go out there 20 minutes before the game and have a live scrimmage because the other stuff ain't working.