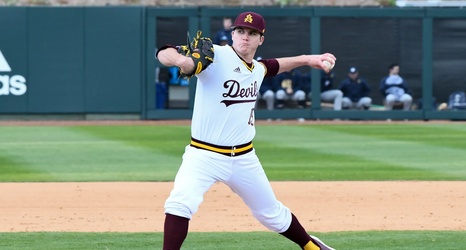 Now-former Arizona State pitcher Erik Tolman signed with the Washington Nationals on Monday afternoon. Tolman was a 14th round selection by the Nats and will not be returning to Tempe for another season.

Jim Callis of MLB.com was the first to report the signing.

Tolman started off his 2020-21 campaign as part of what was supposed to be a dominant rotation for the Sun Devils. The southpaw threw in just three games. He tallied 13.1 innings and 14 strikeouts before his season came to an end in the form of Tommy John surgery.

The Lake Forest, CA native will now be moving to the east coast to play in Washington’s farm system after three years as a Sun Devil.