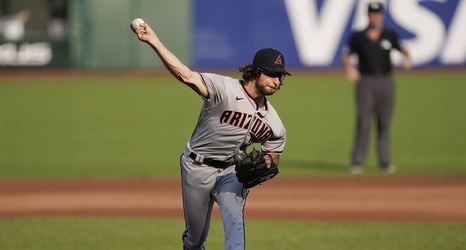 [Arizona Sports] Zac Gallen’s historic streak of 3 runs or less comes to an end against Giants - Arizona Diamondbacks pitcher Zac Gallen’s MLB record of starts to open a career with three or fewer runs allowed came to an end on the road Monday against the San Francisco Giants. Gallen had not allowed more than three runs in any of the first 23 starts in his career with the Miami Marlins and Arizona Diamondbacks. After holding the Giants scoreless through five innings, at one point retiring 14 straight batters, Gallen struggled in the sixth inning, allowing four hits, a walk and three runs without recording an out.