Diamondbacks swept by Mariners rather easily 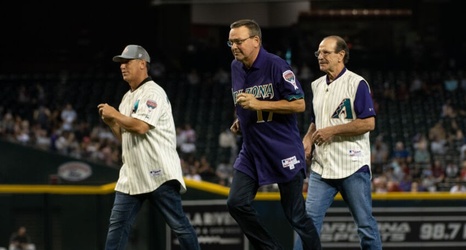 PHOENIX, AZ - SEPTEMBER 04: Luis Gonzalez, Mark Grace and Bob Brenly throw out the Ceremonial First Pitch prior to the MLB game between the Seattle Mariners and the Arizona Diamondbacks at Chase Field on September 4, 2021 in Phoenix, Arizona. (Photo by Kelsey Grant/Getty Images)

Despite it being a celebratory weekend, the Diamondbacks had nothing to celebrate following this series

The Diamondbacks celebrated the 20th anniversary of the 2001 World Series Champions team this past weekend. They wore their throwback jerseys, had giveaways, fireworks, and more. Yet, the team on the field didn’t play at all like that 01′ team.