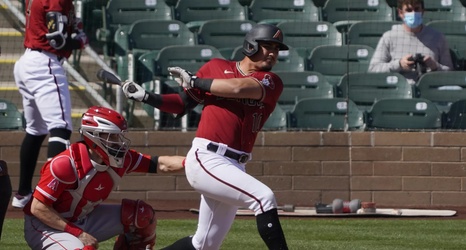 Arizona won their third straight spring game, and largely have local boy Josh Rojas to thank for victory in Goodyear. The West Phoenix native hit a two-run shot in the third, and went one better in the next inning, blasting a three-run homer. Not bad for your leadoff guy to have five RBI by the end of the fourth inning. It probably helped that Pavin Smith went 3-for-3 out of the #9 hole tonight, in front of Rojas. But a lot of D-backs carried their bats back to the dugout. Arizona hitters struck out 16 times, led by Stuart Fairchild's golden sombrero, going 0-for-4 with four K's.