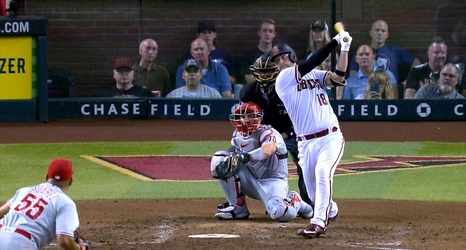 This is certainly going to be a contender for Game of the Year. Which really did not look likely when starting pitcher Madison Bumgarner slumped off the mound in the fourth inning, with the D-backs 7-0 down. But by the end of the fifth, after batting round in consecutive innings, Arizona were 12-7 up, scoring thirteen unanswered runs to tie their season-high win streak at four games, and setting a new record for the biggest comeback in franchise history. If the score in San Francisco stays as it is, they’ll be just one behind the Giants. Oh, and some young player made his first MLB appearance.