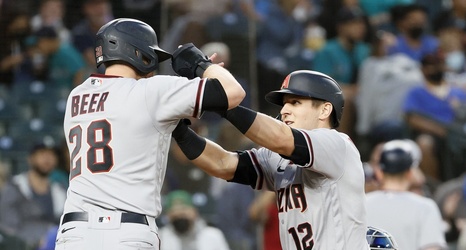 SEATTLE, WASHINGTON - SEPTEMBER 10: Seth Beer #28 of the Arizona Diamondbacks watches his home run during the eighth inning against the Seattle Mariners at T-Mobile Park on September 10, 2021 in Seattle, Washington. (Photo by Steph Chambers/Getty Images)

The Dbacks finally won a road series for the first time since April!

That’s right folks, the Dbacks had not won a road series since APRIL. It’s only been give or take 4 or so months since then. However, the wait is over as the team finally got over the hump. They did it against the Seattle Mariners which only makes it sweeter.