20 years ago today: Yankees edge back in 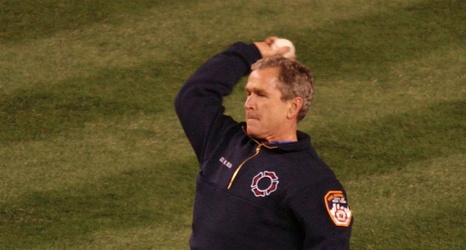 After the two games in Phoenix, the World Series moved back to New York. It was an enormously emotional Game Three, following only a few weeks after the events of 9/11 had killed thousands of the city’s residents and workers. There was so much about the presentation which was emotional. Perhaps the most striking was the singing of the National Anthem by Max Von Essen, son of the city’s fire commissioner. As the final notes hit, a bald eagle swooped in, landing on its handler’s arm perfectly in sync with “brave.” Then there was President Bush, throwing out the first pitch (above), in a bullet-proof vest.