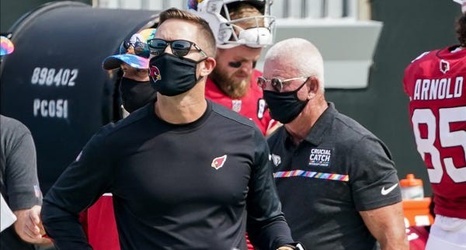 It’s a common lament made by football coaches after losses:

The plays were there to be made.

Coach Kliff Kingsbury gave a watered-down version of that on Monday when asked about the Cardinals' lack of big gains via the pass in a loss to Carolina last Sunday. Chunk plays, they call them these days.

“I thought we had some opportunities,” he said.

Yes, they did. Not enough of them, to be sure, which falls upon Kingsbury and his play-calling. But the Cardinals had chances at big plays and didn’t make them.

What was thought to be an anomaly in a 2-0 start became a trend in the next two weeks, and, no surprise, it’s mostly up to the head coach and coordinator, Kingsbury, and the quarterback, Kyler Murray, to fix it.