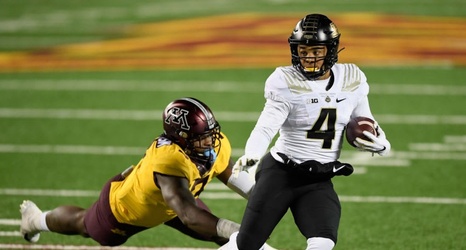 MINNEAPOLIS, MINNESOTA - NOVEMBER 20: Rondale Moore #4 of the Purdue Boilermakers avoids a tackle by MJ Anderson #3 of the Minnesota Golden Gophers during the third quarter of the game at TCF Bank Stadium on November 20, 2020 in Minneapolis, Minnesota. The Golden Gophers defeated the Boilermakers 34-31. (Photo by Hannah Foslien/Getty Images)

General Manager Steve Keim entered the NFL draft with the desire to add speed and athleticism to both sides of the ball. Spending their first and second-round picks on Tulsa linebacker Zaven Collins and Purdue wideout Rondale Moore.

Zaven Collins is a hybrid edge and off-ball linebacker.