Dropped pick may have cost Arizona Cardinals a victory 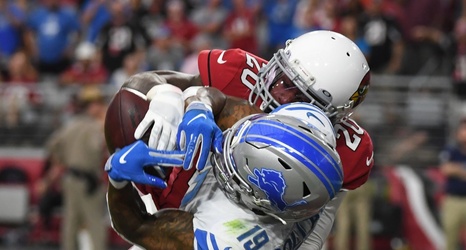 Everyone who was watching from the Arizona Cardinals sideline were ready to go into celebration mode. Detroit Lions quarterback Matthew Stafford‘s errant throw was sailing through the air, with a cornerback from the Cardinals waiting on the other end. All Tramaine Brock had to do was haul in an easy interception, and the squad may have quite possibly come away with an improbable, overtime victory.

Unfortunately, a fairy-tale ending for the Cards was not in the books. Stafford’s pass ricocheted off of the hands of Brock, allowing the Lions to escape with a 27-27 tie. After the game, Arizona’s dejected cover guy offered his analysis of the play.