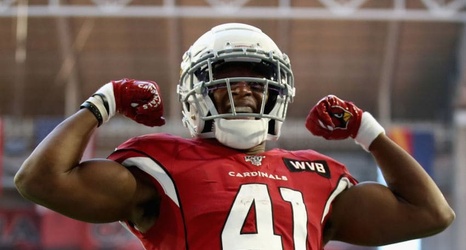 GLENDALE, ARIZONA - DECEMBER 15: Running back Kenyan Drake #41 of the Arizona Cardinals celebrates after scoring on a five yard rushing touchdown against the Cleveland Browns during the first half of the NFL game at State Farm Stadium on December 15, 2019 in Glendale, Arizona. (Photo by Christian Petersen/Getty Images)

Kenyan Drake thinks the Arizona Cardinals will be a nuisance for teams. He’s right, and the NFC West should take notice.

Yes, it’s May. Late May to be exact, and in terms of NFL Football, it’s every fan for him/herself. Of late, the landscape is about if and when we see players on the field, rookies especially, as the league ramps up for the 2020 season.