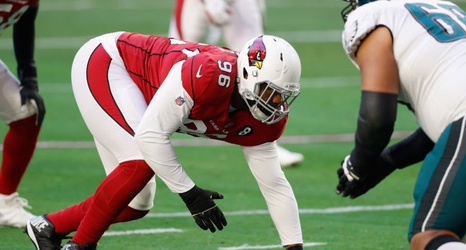 GLENDALE, ARIZONA - DECEMBER 20: Defensive end Angelo Blackson #96 of the Arizona Cardinals lines up during the NFL game against the Philadelphia Eagles at State Farm Stadium on December 20, 2020 in Glendale, Arizona. The Cardinals defeated the Eagles 33-26. (Photo by Christian Petersen/Getty Images)

Back in March of 2020, the Arizona Cardinals front office made an expensive addition to their defensive tackle group. Jordan Phillips, a veteran from the Buffalo Bills, was inked to a three-year, $30 million contract by the Cards. It was a solid acquisition, made to inject some talent into the front wall of the Arizona defense.