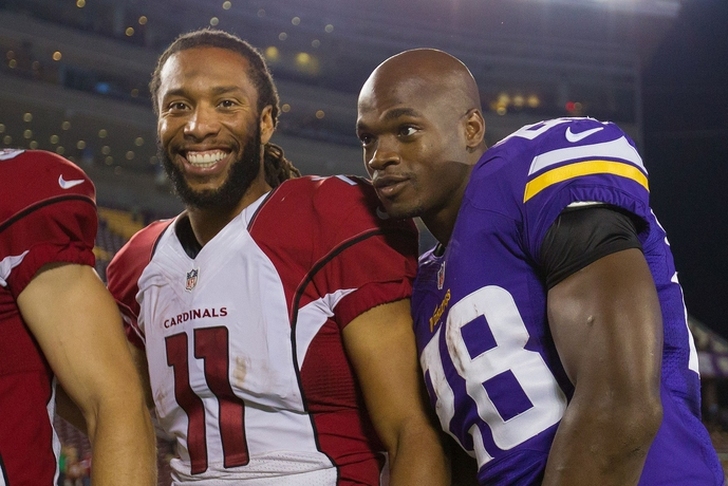 Tonight's Thursday Night Football game has major NFC Playoff implications as the NFC West-leading Arizona Cardinals (10-2) look to keep their drive for a first-round bye going smoothly when they host the Minnesota Vikings (8-4). Minnesota has suffered two humbling losses in their past three games, falling into a virtual first-place tie with the Green Bay Packers atop the NFC North. Who's got the edge in this one? Here's our game preview and prediction.

Arizona has a three-game lead over the defending NFC champion Seattle Seahawks with four to play. Defeat Minnesota and they'll virtually guaranteed themselves a division title and keep themselves at least two games up for the #2 seed in the NFC. The Vikings, on the other hand, have plenty to prove in tonight's road game. A loss throws them back in the Wild Card pack while a win will give them a half-game division lead and a boost of confidence headed down the regular season stretch.

What They're Saying About The Minnesota Vikings:

Less From Bridgewater Could Mean More For Minnesota

What They're Saying About The Arizona Cardinals:

Andre Ellington Out, 4 Starters Out For Minnesota's Defense

Cardinals Dialed In For The Last Four Games

The Cardinals' biggest task as they look for their franchise-best seventh straight win is stopping Adrian Peterson and Minnesota's running game early and often. If the Cards can force Minnesota into third-and-longs early and capitalize if/when the Vikings can't convert via the air, they'll have the recipe for a blowout. Minnesota is not built to come from behind, as they showed in a blowout loss last week to Seattle. With four starters out on defense, it's crucial for the Vikings to get the ground game going early and limit Arizona's possessions. If they can't play clock management and field position effectively, it's lights out.

The spread on this game looks a little high until you consider just how bad Minnesota has looked as of late and how think their defense is right now. They'll show up and make a game of it in this one, but Arizona QB Carson Palmer has too much firepower at his disposal to let this one slip away.