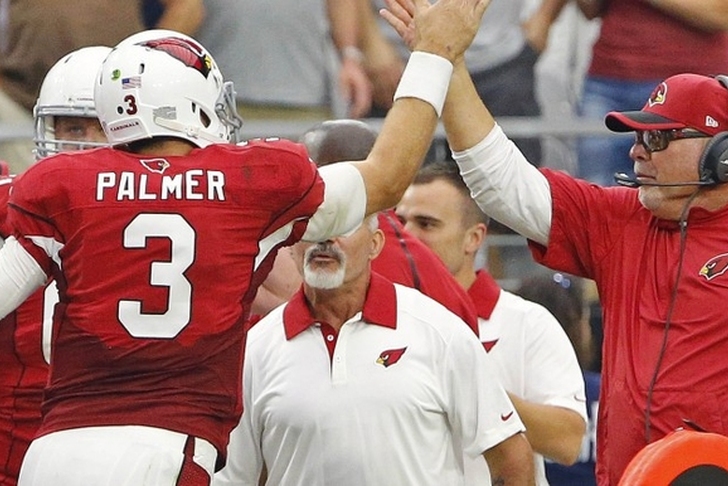 An uncharacteristically rough night at the office almost doomed him on Saturday as did two crazy throws by Aaron Rodgers to force overtime. However, he'd come up clutch on the first and last drive of overtime -- closing things out in a stunning 26-20 win.

With the win, the Cardinals move on to the NFC Championship Game where they're either travel to face the #1 seeded Carolina Panthers in Charlotte or host the NFC West rival Seattle Seahawks in Glendale.

Palmer threw two interceptions on Saturday night, including an inexplicably awful throw in the red zone which was basically gifted to Packers rookie cornerback Damarious Randall at the beginning of the fourth quarter.

However, he got some major help late as a 14-play, 80-yard drive ended with this insane deflection caught for a touchdown by WR Michael Floyd to make it 17-13:

Arizona made it 20-13 with a field goal and seemingly had the Packers dead in the water with a minute left and a 4th and 20 deep in Packers territory.

Aaron Rodgers wouldnt be denied, though, completing two amazing passes to WR Jeff Janis -- a 65-yarder that put Green Bay in Arizona territory and this 41-yard TD strike to Jeff Janis with all zeroes on the clock in the fourth:

The play sucked the life out of the crowd and looked to be the beginning of the end for the Cards' playoff hopes.

However, Palmer would have the last laugh -- hitting Larry Fitzgerald on a 75-yard pass play in overtime that will go down in the annals of Cardinals franchise history:

From there, it was as academic as Palmer would scramble and hit Fitzgerald one more time for a short touchdown throw that sent the home crowd into a frenzy and pushed the Cardinals to the brink of a Super Bowl berth.

The veteran Cards quarterback finished 25 of 41 for 349 yards, three touchdowns and the aforementioned two interceptions. His aerial fireworks were the key for the offense, as Green Bay held the rushing attack to just 40 yards.

On the other side, Aaron Rodgers was dealt a rough hand after star WR Randall Cobb was ruled out of the game in the second quarter with a chest injury. He persevered, carrying the Packers on his back and almost pulling off an improbable home win. Rodgers threw for just 261 yards with two touchdowns and a pick, but his stat line belies a game effort which almost sent Green Bay to its second straight NFC title game.

In the end, it was Arizona's night and a major validation of one of the best regular seasons in franchise history. Whether it's Carolina or Seattle, the Cardinals are battle-tested enough to make next week's NFC Championship Game one to remember.