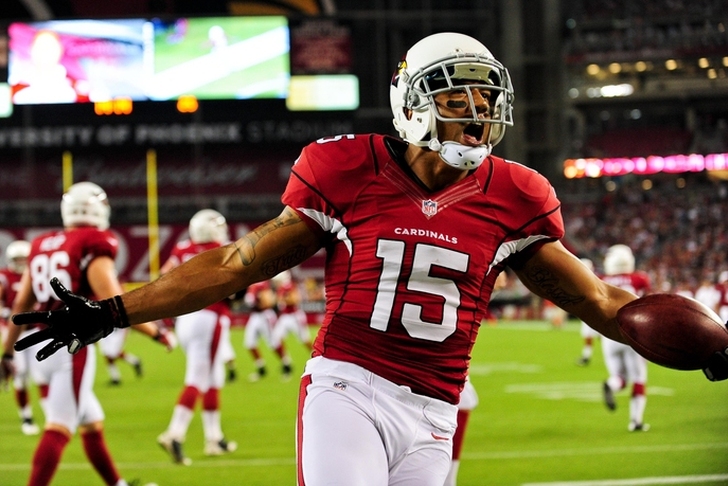 Wild, crazy games don't always have to be high-scoring. Case in point -- the first half of Saturday night's NFC Divisional Round matchup between the Green Bay Packers and Arizona Cardinals, led by the Cards 7-6 at the break.

Trading off crazy acrobatic catches (one of them, a Randall Cobb diving gem which didn't count due to a penalty) and impactful tackles, the Packers and Cardinals are putting on an entertaining showdown which is setting up for a photo finish.

Arizona got on the board first after a poor punt by the Packers' Tim Masthay set them up with a short field at the Green Bay 42. Arizona would methodically move it to pay dirt from there, capping off an 11-play drive with a brilliant toe-tap TD catch by WR Michael Floyd )off a beautiful Carson Palmer throw) in the back corner of the end zone.

The Packers' deficit seemed to double after Patrick Peterson returned an Aaron Rodgers interception 100 yards for what appeared to be a touchdown. However, an illegal hands penalty saved Green Bay and ultimately set up a chip-shot Mason Crosby field goal which made it 7-3.

Green Bay's offense would suffer a HUGE blow as it was announced that Randall Cobb is ruled out with a chest injury. Now without their top wide receiver, the Packers and Aaron Rodgers are left to scramble to replace his production.

They did a fine job of it, at least, at the end of the half. A lengthy 17-play, 71-yard drive which took up over half of the second quarter ended with Mason Crosby's second field goal of the night -- cutting the deficit to one.

That would end the scoring in a dramatic first half that portends even more drama to come.