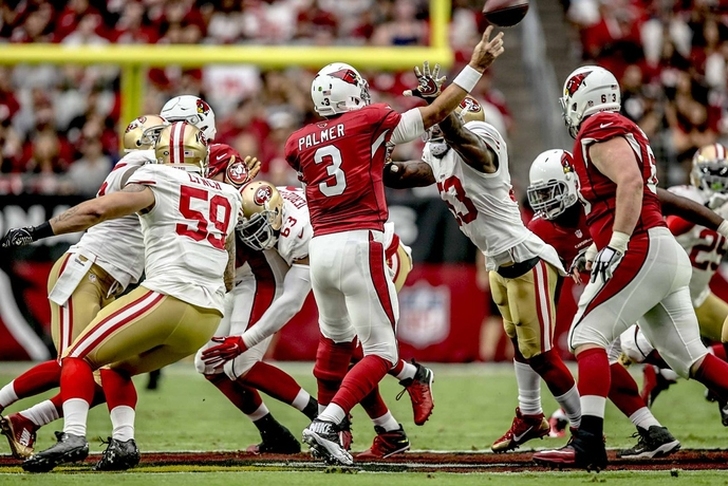 The Arizona Cardinals are simply finding ways to win over the past several weeks, including a less-than-pretty 19-13 road win over the San Francisco 49ers on Sunday. Arizona moves to 9-2 on the season, three games clear of the second-place Seattle Seahawks in the NFC West. San Francisco remains in the cellar of the division at 3-8. Here's some notes, quotes and observations from Arizona's victory.

The Cardinals won ugly in this one. Carson Palmer saved the day, running it in from eight yards out with 2:28 left to put the Cards ahead to stay. Arizona has now won five straight and notches their first road victory in SF since 2008.

San Francisco's fatal flaw in this game? Penalties. The 49ers committed 13 for 81 yards, although a couple of the whistles were extremely controversial (including a 15-yard unsportsmanlike conduct penalty on Torrey Smith for making contact with the side referee). Questionable officiating was the hottest topic coming out of Sunday's game.

Arizona's running game had an extremely tough time against the 49ers front seven, running 29 times for just 70 yards. The team's inability to establish the run almost rendered a workmanlike day by Carson Palmer (24/40, 271 yards) as moot.

Blaine Gabbert had a fine effort in a losing cause for the 49ers, going 25/36 for 318 yards, one touchdown and one interception. He did far better than Colin Kaepernick's four-interception performance in the team's 47-7 loss to the Cards earlier in the year.

"I believe there's progress, but we're in the business of winning games." -- 49ers HC Jim Tomsula

"The officials were struggling...mightily. They couldn't count to three." -- Bruce Arians

"I'm not going to comment on the officiating." -- Jim Tomsula

Arizona is a game clear of the NFC North-leading Minnesota Vikings for a first-round bye with five games left to play. The NFC West appears to be all but sewn up for the Cardinals, so it's time to start thinking home-field advantage. The whole kit and kaboodle could come down to Week 14's home showdown with the aforementioned Vikings. If Minnesota holds pat in their division, a win would give Arizona a crucial head-to-head tiebreaker.

Don't blame this loss on Blaine Gabbert or Jim Tomsula. While we won't go so far to say the 49ers had a win yanked from them by the officials, it's plain to see that the 50/50 calls were not going their way on Sunday. San Francisco didn't play a perfect game by any means, but they did nearly enough to upend an elite Cardinals team. Moral victories don't count in this league, however, so expect both Tomsula and Gabbert to remain under the media microscope for the coming week and beyond.