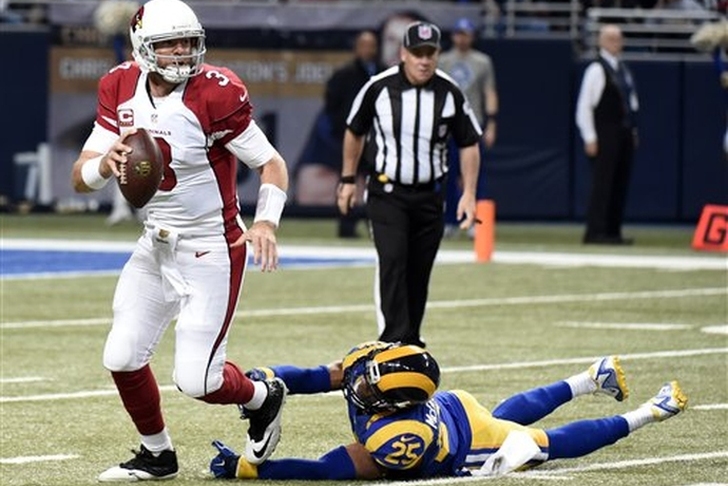 "IThe Arizona Cardinals continued their hot streak on the road, dominating the St. Louis Rams on their way to a 27-3 win. Here's everything you need to know from today's game:

Arizona can clinch the NFC West with one more win and one more loss by the Seattle Seahawks.

The St. Louis Rams have now lost five games in a row, falling to 4-8 on the season. The trendy pick to win the division at the start of the season, St. Louis is now tied for last in the division. with the San Francisco 49ers.

Cardinals quarterback Carson Palmer threw for over 300 yards for the fourth time in the last five games. Arizona is 6-2 when Palmer reaches that mark.

“We’re still looking to improve. I’ve got to find reasons to holler at them about and make sure we are improving each week. There is time to look back on the journey and enjoy it but this isn’t it, especially on a Thursday night week.” - Cardinals head coach Bruce Arians.

“I wish we would’ve played a perfect game, but it was a pretty solid game.” - Cardinals defensive tackle Calais Campbell.

What has happened to Rams running back Todd Gurley? The rookie has fallen off dramatically since posting four straight 100+ yard rushing games, but he simply hasn't gotten the ball lately, getting just nine carries in each of the last two games. St. Louis needs to get their star player the ball a LOT more than that.

St. Louis also needs a quarterback if they're ever going to be competitive in the division. Their league-worst passing attack took another step back in this one as Nick Foles completed just 15/35 passes for 146 yards and one interception, good for a lowly 43.3 quarterback rating.