Thomas Earns a Sun Belt Player of the Week Honor 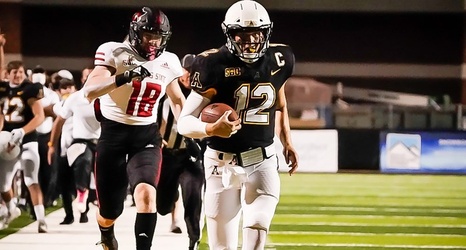 BOONE, N.C. — After a performance that included career highs as both a passer and runner, App State quarterback Zac Thomas has been named an Offensive Player of the Week by the Sun Belt Conference.

Thomas and South Alabama receiver Kawaan Baker were both recognized by the Sun Belt for their offensive performances. Additionally, Thomas made the Davey O'Brien Award's "Great 8" quarterbacks list for Week 8, and the CFB Focus account on Twitter had Thomas leading the nation in Week 8 with a QBR score of 98.4.

Thomas tied his career high of four touchdown passes and rushed for a career-high of 82 yards, thanks in part to a 60-yard touchdown run, in a 45-17 win against Arkansas State on ESPN.