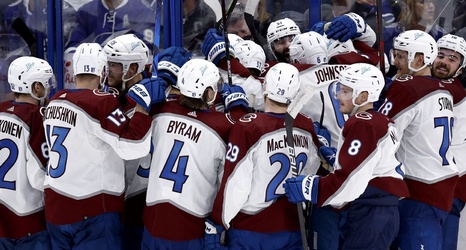 TAMPA, Fla. -- In his series debut, Nazem Kadri scored the game-winning goal in overtime as the Colorado Avalanche outlasted the Tampa Bay Lightning, 3-2, in Game 4 of the Stanley Cup Final Wednesday.

The Avalanche now lead the series, 3-1, and can win their first title since 2001 on Friday night in Game 5 at home.

Kadri had missed four straight games, dating back to the last series, since suffering a broken thumb June 4. He wore a regular burgundy sweater and participated in drills with the Avalanche's second power-play unit in Wednesday morning skate, and took a normal shift on the second line all game.