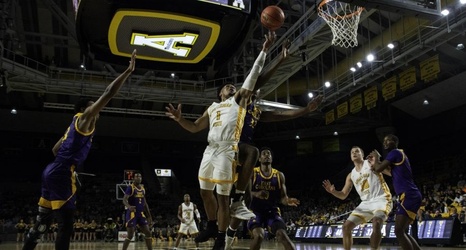 Junior guard Justin Forrest reaches up for a layup during last Tuesday’s game against East Carolina. Forrest is now first on the team in scoring.

Since arriving on the hoops scene in 2017, Justin Forrest has added his name to the top of opposing scouting reports across the Sun Belt and the rest of the country.

The junior guard from Decatur, Georgia has emerged as a team leader both on and off the court and is poised for a big 2019-2020 campaign.

Forrest enjoyed a decorated prep career in which he was a two-time high school state champion before arriving in the High Country.