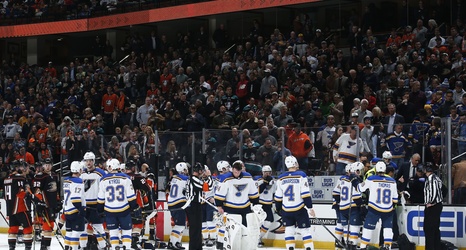 It was a frightening scene when frantic St. Louis Blues skaters were waving over to the Anaheim Ducks bench for medical help, and it was a long wait afterward before the game was postponed. In the video playback on Fox Sports West, all that could be seen was a short glimpse of Bouwmeester slumping over on the bench before falling out of sight.

As reported by Eric Stephens, the teams mutually decided to postpone the match in the case of the emergency that just unfolded. Eventually, the Ducks and Blues broadcast crews broke the news that Bouwmeester came to and was being sent over to a local hospital, so he did gain consciousness in a hopeful turn of events.