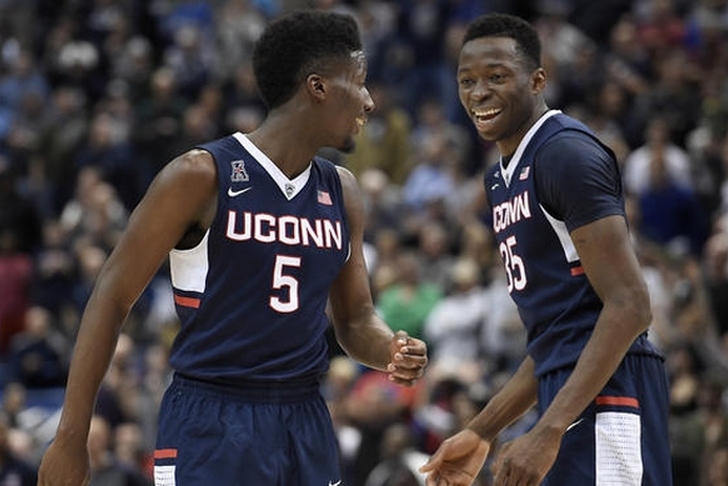 The Cincinnati Bearcats and UConn Huskies met in  a AAC Conference Tournament quarterfinal game with extremely high stakes. The loser of this game would fall off the NCAA Tournament bubble, and both teams played like it.

Cincinnati closed the second half on a 9-2 run over the course of the final four minutes, forcing the initial overtime at 62-62. The two sides only traded a few baskets in the first overtime as the score went to 67-67. Overtime #2 was more of the same until the last few seconds.

The Bearcats thought they had the game won when Troy Caupain made a running floater to five Cincinnati the lead with 15 seconds left, but Jalen Adams responded with a layup of his own with five seconds left for UConn to tie the game 75-75.

And so we went to a third overtime, where the unthinkable happened.

UConn then entered the fourth overtime with all the momentum, which they used to carry them to an absolutely remarkable 104-97 four overtime win over Cincinnati.

Guard Daniel Hamilton led the way for the Huskies with an absolutely monstrous performance with 32 points, 12 rebounds, and eight assists. He was helped by freshman Jalen Adams, who had 22 points off the bench - including that full-court shot to force a fourth overtime.

Cincinnati was led by guard Troy Caupain, who dropped a game-high 37 points to go along with 10 rebounds and five assists.

With the win, UConn advances to play Temple in the AAC Touranment semifinals tomorrow. The game tips at 3:00 pm ET on ESPN2.