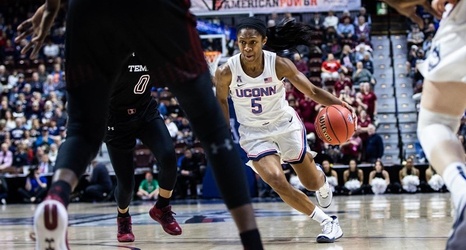 UNCASVILLE, Conn. – No. 1 seed UConn fired on all cylinders in its debut at the 2020 American Athletic Conference Women’s Basketball Championship, dispatching of No. 8 seed Temple in a 94-61 victory in quarterfinal action on Saturday at the Mohegan Sun Arena. The top-seeded Huskies will face No. 4 seed USF in the first tournament semifinal on Sunday at 4 p.m. (ET) on ESPN2.

Crystal Dangerfield scored a game-high 22 points after hitting 6-of-9 shots from beyond the arc during the contest, chipping in four rebounds to go along with three assists for UConn.