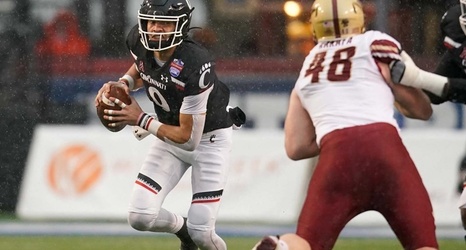 BIRMINGHAM, Ala. -- Desmond Ridder ran for 105 yards and three touchdowns and threw a scoring pass to lead No. 23/22 Cincinnati to a 38-6 victory over Boston College on Thursday in the weather-delayed TicketSmarter Birmingham Bowl.

The Bearcats (11-3) reached 11 wins for the second straight season and fourth in program history, bouncing back from two straight losses to No. 15 Memphis.

Ridder had two 13-yard scoring runs and a 14-yarder, setting a Cincinnati bowl record for rushing and total TDs. He had 21 carries and also passed for 95 yards with an 8-yard score to Malick Mbodj before leaving the game early in the fourth quarter.