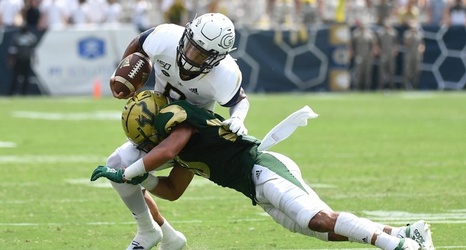 ATLANTA -- Jordan Mason and Tobias Oliver each scored second-quarter touchdowns, and the Georgia Tech defense recovered a critical fumble at the goal line in the fourth quarter as the Yellow Jackets held on for a 14-10 win over South Florida on Saturday afternoon to give first-year coach Geoff Collins his first win since returning to his home town.

There wasn't much offense Saturday beyond Mason, who rushed 20 times for 99 yards. For the second straight game Tech played three quarterbacks, starting redshirt sophomore Lucas Johnson and bringing Oliver -- who started last week at Clemson -- and James Graham off the bench.