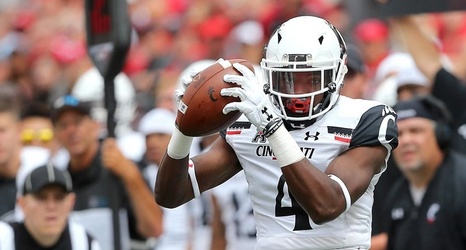 THE GAME • THE BATTLE FOR THE VICTORY BELL
Saturday’s game will be the 124th meeting between Cincinnati and Miami (Ohio) in a series that dates to 1888 … It is the second-oldest rivalry in FBS football, behind only Michigan-Notre Dame (1887) … The RedHawks lead the series, 59-57-7, but Cincinnati has won the last 13 games, including a 21-0 win last year at Paul Brown Stadium.

Notes
Miami evened its record at 1-1 after the RedHawks rolled to a 48-17 win against Tennessee Tech last Saturday in their Homecoming game … Miami built a 41-3 lead by halftime and finished the game with five rushing touchdowns, a defensive touchdown and two field goals … The RedHawks opened the season with a 38-14 loss at Iowa … Miami went 6-6 last season under coach Chuck Martin, who inherited a team that was 0-12 and has won at least five games in each of the last three years … Freshman QB Brett Gabbert has thrown for 338 yards and two touchdowns with one interception in his first two games … RB Tyre Shelton, a redshirt freshman, has 69 rushing yards on 13 carries to lead a deep backfield … The RedHawks have eight players with at least three receptions this season.