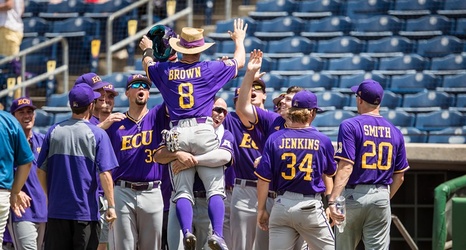 PROVIDENCE, R.I. – ECU (47-16), the NCAA Baseball Championship’s No. 10 national seed, advanced to its fifth NCAA Super Regional and second in four seasons (2001, 2004, 2009, 2016) after defeating Campbell twice in the Greenville Regional final on Monday. The Pirates, which had to win three elimination games, started off the day with a 10-3 win over the Fighting Camels before surging to victory in a winner-takes all final with a 12-3 rout of Campbell in the second game of the day.