Who Will Coach Alabama Football When Nick Saban Retires? His Top 4 Potential Successors 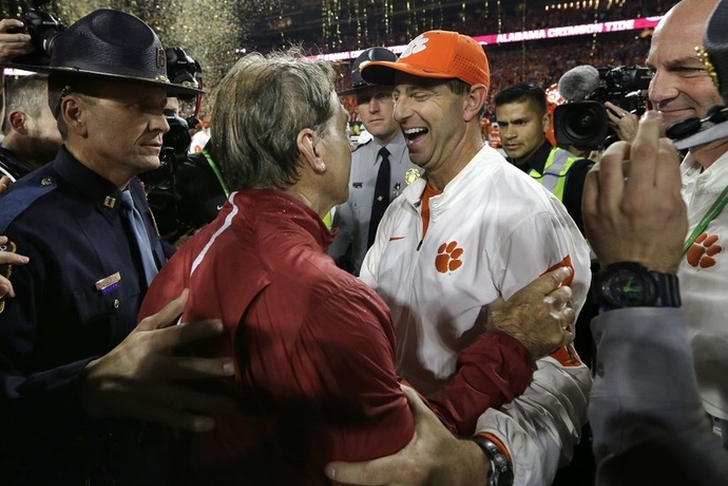 Nick Saban has turned the Alabama Crimson Tide into the latest college football dynasty since taking over the job in 2007, leading them to four national titles and five SEC championships over the course of the past seven years. While he has shown no signs of slowing down, Saban is 64 years old, and his coaching days are obviously numbered. So, who could Alabama possibly turn to take over the program whenever Saban does retire? Here are his top four potential successors:

McElwain was the offensive coordinator at Alabama under Saban from 2008-2011 and has since become a very successful head coach at Colorado State and now at Florida. He led the Gators to the SEC East title in his first year and has proven to be an excellent recruiter. Florida is another one of the premier jobs in the country, but Alabama is THE job. He would definitely consider it if Alabama pursued him. Kelly left the college ranks in 2012 for the NFL after turning Oregon into a powerhouse program, and followed that up with two 10-win seasons with the Philadelphia Eagles before being fired. Those around him say he loves working in the NFL, but if things go south in San Franciso, he would have his pick of college jobs. Alabama will certainly pursue him whenever Saban does retire, and it would be very hard for him to turn them down if he has any kind of interest in returning to the college game.

Smart has been Saban's right-hand man since 2004, following him from LSU to the Miami Dolphins and then to Alabama, where he was the defensive coordinator from 2008-2015 before taking the Georgia job. Even though he has only been on the job for three months, he reeled in a top five recruiting class and has re-invigorated a stalling Georgia program. The only thing that could possibly stand in Alabama's way of landing Smart is that UGA is his alma mater, but he may be enticed at the idea of replacing his mentor.

Speaking of alma maters, Swinney is extremely proud of the time he spent at Alabama, playing wide receiver for the Tide before joining the coaching staff from 1993-2000. He has since become one of the best coaches in the country with Clemson, turning them into a team that competes for national championships on a yearly basis. He's an excellent recruiter, has a proven track record on the field, and very strong ties to the program. If (and when) the Tide come calling, it will be very hard for Dabo to turn them down.