What We Learned From Alabama's 30-16 Win Over LSU 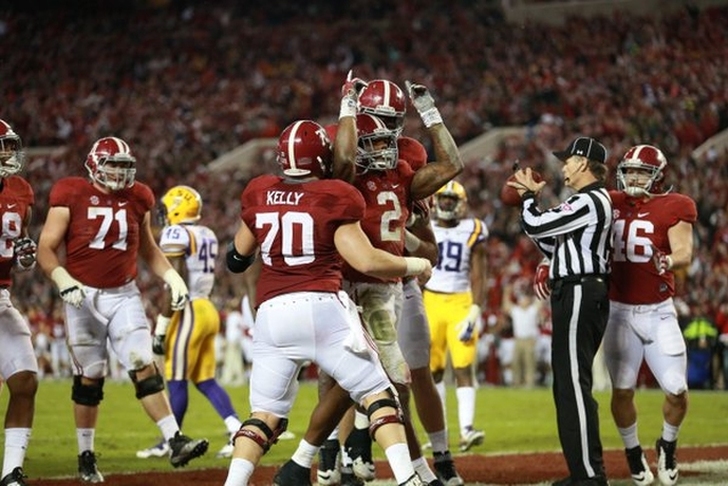 The Alabama Crimson Tide put on the most dominant performance of the college football weekend by blowing out LSU 30-16 in Tuscaloosa. Here are three things we learned about the Tide in the win:

3) Alabama has the confidence of the No. 1 team in the country

Clemson will probably keep the top spot in the College Football Playoff rankings, but Alabama is carrying themselves like they're the No. 1 team in the country. Ever since they lost to Ole Miss, the Tide just seem to have a different air of confidence around them. They took care of business in impressive fashion against Georgia and Texas A&M, passing those tests with flying colors. Then trailing Tennessee with less than five minutes left, they made the plays they needed to down the stretch, showing the mental toughness of this team.

Of course, that all came to a head against LSU. No one wants to play this team right now.

2) Derrick Henry is the Heisman frontrunner

Not only did Henry severely outplay the previous Heisman favorite in Leonard Fournette, but he had one of the best performances of the season by shredding LSU's extremely stingy defense for 210 yards and three touchdowns. Henry was already knocking on the door, but with his performance - along with the lackluster play of Fournette and TCU QB Trevone Boykin on Saturday - it looks like Henry is the guy to beat going forward.

1) Alabama's run defense is the best in the country

Fournette came into the game averaging nearly 200 yards per game, a mark that would shatter the SEC record held by Herschel Walker. The Tide didn't flinch, taking to Fournette every chance they got, limiting him to just 31 yards on 19 carries.

There were a lot of questions about this defense following their early season loss to Ole Miss, but they've rebounded and become the kind of defense you would expect from a Nick Saban-coached team.