What We Learned From Alabama's 30-12 Win Over Auburn 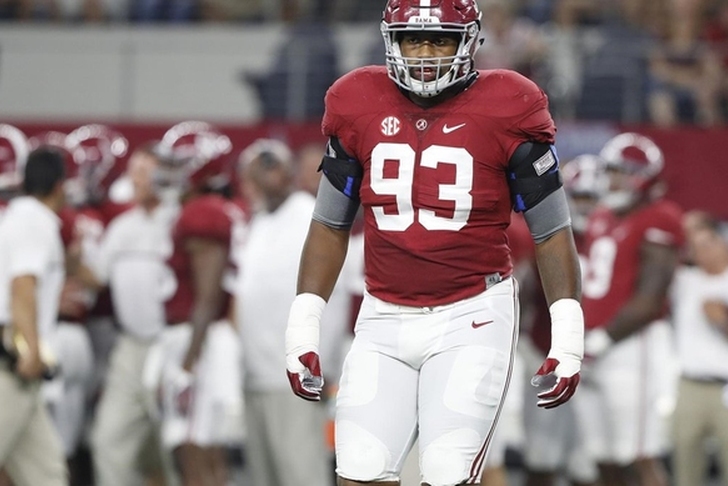 For the third straight year, the Alabama Crimson Tide have won the Iron Bowl. The Tide rolled past the Auburn Tigers 30-12 Saturday, as the Alabama defense totally shut down Auburn. Alabama is now 12-0 and in perfect position for the College Football Playoff. They'll play Florida in the SEC Championship, a matchup that was not going to be affected by what happened Saturday.

Here are three things we learned in the Alabama win over Auburn.

3. Hurts Must Eliminate The Turnovers
The weakness for Alabama teams in recent years is QB play. They don't have a Deshaun Watson, but have used effective game-managers to win national championships. Jalen Hurts has the potential to be more of a playmaker at QB, and although he shows flashes, he still makes mistakes. You saw that Saturday, as Hurts was picked off twice. Those plays could have been game-changers, if the Auburn offense wasn't so terrible (see below). Hurts also had a fumble that was overturned. Hurts brings a dual-threat ability Alabama hasn't had under Nick Saban, but he needs to eliminate some of those turnovers. It hasn't cost the Tide a win yet, but in could come CFP time.

2. Auburn Had No Offense
Maybe it was just Alabama's defense playing a great game. Maybe it was not having Sean White. Whatever the reason(s), Auburn had zero offense against the Crimson Tide. The Tigers posted just 182 yards of offense, were 2 of 12 on third downs and had just seven first downs all game. Auburn actually had negative yards in the first quarter. Three different QBs saw action: Jeremy Johnson, John Franklin III and Chandler Cox. Johnson was terrible, Franklin could run but wasn't a real passing threat. Auburn's offense looked a lot like the one we saw last year and early this year: a total mess.

1. Alabama Is Rolling To The No. 1 Seed In The CFP
Yeah, so we probably already knew this, but it still stands. At 12-0, the Tide are in the driver's seat for the No. 1 overall seed in the College Football Playoff. Alabama has looked like the best team all season long and they are the clear-cut favorites to win the CFP. Heck, even a loss to Florida might not be enough to knock the Tide out. If they aren't locked into a spot, they're as close as you can possibly be.