What We Learned From Alabama's 10-0 Win Over LSU 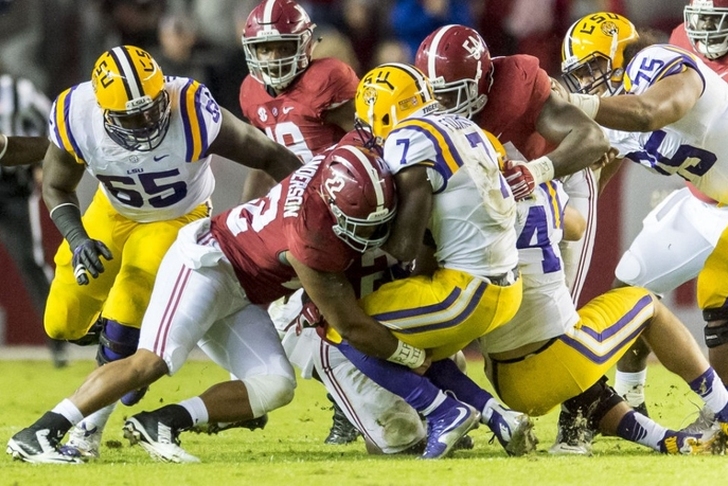 It was another defensive slugfest between the Alabama Crimson Tide and the LSU Tigers, but Alabama managed to get their sixth straight win in the series with a 10-0 victory. The game was scoreless until the fourth quarter, giving us another classic in this rivalry series. Here are three things we learned from the game.

3) Jalen Hurts isn't great yet, but he has greatness in him
For three quarters, Hurts looked very much like a freshman. He threw an interception on the first drive of the game and fumbled on another possession. He wasn't great throwing the ball either, as he finished just 10/19 passing for 107 yards and no touchdowns. However, it was what he did in the fourth quarter that showed why he is hyped as one of the better quarterbacks in the country.

After being stonewalled all night, he played his best when it mattered most, rushing for 70 yards in the fourth quarter alone - including the game's only touchdown:

Hurts scrambles for the 21-yard TD to give #Alabama the 7-0 lead in the 4th! #BAMAvsLSU #RollTide pic.twitter.com/DYk44fgdko

Hurts finished with 114 rushing yards and that score on just 20 carries, having that to go along with is passing stats above. It's clear that Hurts still has a lot of room to grow, but he has the intangibles and competitiveness you can't teach.

2) These might be the two best defenses in the country
Lackluster offenses were part of the reason this game was so low-scoring, but in reality, the 10-0 scored reflects exactly how dominant both defenses were. Players for both teams were flying all over the field and making plays at the line of scrimmage and on the perimeter, showcasing the athleticism and talent both sides have at every position.

For LSU, they forced two turnovers and limited LSU to an eye-poppingly low 107 passing yards. The rushing yards they allowed were a bit inflated due to them wearing down the fourth quarter, but they showed their dominance from start to finish.

For Alabama it was another absolutely amazing performance. They didn't score a non-offensive touchdown for the first time this season, but they gave up no points and allowed a total of 125 yards. Also of note, for the sixth year in a row, the Tide held LSU to less than three yards per carry - including just 1.2 yards per rush in this game. That's amazing, especially considering they had to stop Leonard Fournette.

1) Danny Etling isn't an upgrade over Brandon Harris for LSU
The Tigers made the switch from Harris to Etling earlier in the season to help jumpstart the passing attack, and while it has done that against lesser opponents, Etling's performance showed he's not really much of an upgrade. He finished just 11/24 passing in this game for only 92 yards - good for a measly 3.8 yards per attempt. To make matters worse, he routinely missed open receivers on short passing attempts due to his wild inaccuracy. It was a terrible performance when LSU simply needed him to be anything but that.