What We Learned From The 2017 Alabama Football Spring Game 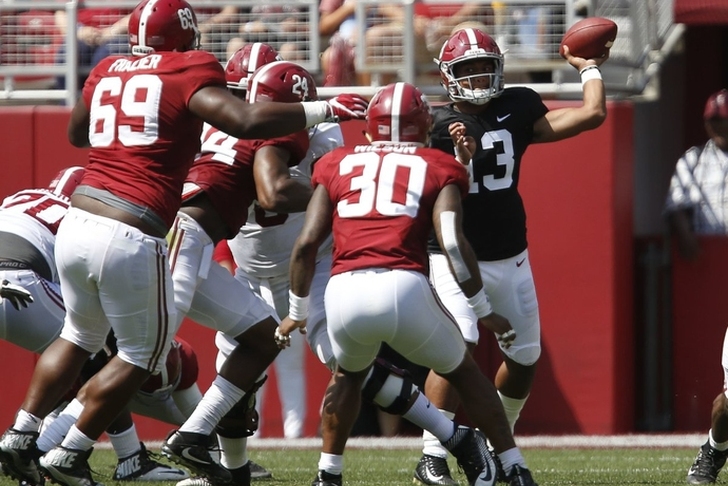 The 2017 Alabama Crimson Tide Spring Game didn't lack drama. It was a back-and-forth battle, highlighted by JK Scott's game-winning field goal as time expired. The embed of that kick is below and it gave the Crimson team a 27-24 win over the White team.

Quarterback play was a major takeaway from "A-Day", thanks to Jalen Hurts and Tua Tagovailoa. With that in mind, here are four things we learned from the Alabama Football Spring Game.

FINAL: JK Scott wins it for the Crimson team.

The Defense Can Still Score
Hopefully, for Alabama, their absurd ability to score while on defense carries over to next year. After doing it a ton last year, the Crimson Tide picked up right where they left off. Terrell Hall had a pick-six, running an interception off a screen back 60 yards. Check it out below.

Sophomore edge rusher Terrell Hall with the INT for a TD. This #Alabama defense loves to find the endzone. pic.twitter.com/AOseB5VvgK

LBs Looked Sharp
Alabama is losing three starting linebackers to the NFL this year, new players will be counted on to step up. Near the top of the list is Rashaan Evans, who played plenty last year. An expected starter at ILB, Evans racked up six tackles and a game-high two sacks. With his pass rushing ability on display, perhaps Evans sees some action on the outside as well. Keith Holcombe, who is a likely backup, led all tackles with 10. Then there was the young and talented Mack Wilson, who had five tackles and some solid coverage plays. He doesn't have the experience the others do, but he might be too good to keep off the field next year.

Passing Attack Looked Good, Secondary Not So Much
Those who want true freshman Tua Tagovailoa to play likely didn't change their minds after his great effort. But Jalen Hurts played well too. Hurts, who showed an improved deep ball, completed 61.5 percent of his passes for 301 yards, 2 TDs and a pick. Tagovailoa, meanwhile, completed 56.3 percent of his passes for 315 yards 3 touchdowns and one interception. Both players had some issues (forcing balls, moving to second and third reads), but the upside is still there.

On the flip side, giving up over 600 yards passing to a true freshman and a sophomore who is still raw as a thrower is not what Nick Saban had in mind for his defense.

Hello, Jerry Jeudy
The top WR during the spring game wasn't Calvin Ridley (although he was really good too). Instead, it was Jerry Jeudy. He racked up five catches for 134 yards and two scores. With ArDarius Stewart and Gehrig Dieter gone, there's room for a youngster to get playing time right away. After his great play (Jeudy was No. 1 on the white team depth chart at WR entering the game), it might just be Jeudy. Fellow freshman Najee Harris also looked pretty damn good.

Follow our Alabama Crimson Tide team page for all the latest Alabama Football News or download the Chat Sports App!