WATCH: Every Alabama Touchdown From The Crimson Tide's 52-6 Win Over USC 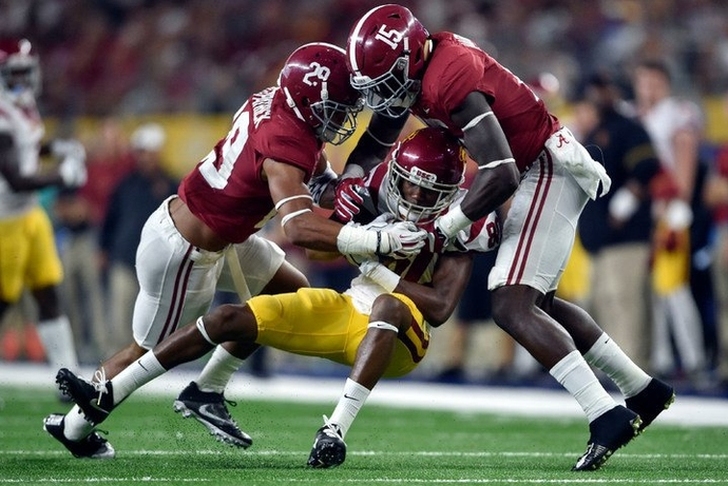 The No. 1 Alabama Crimson Tide had no problem with the No. 20 USC Trojans. It was close game early, but the Tide ran away with the game in the second quarter and rolled to a 52-6 win. Check out every TD from Alabama's season-opening win below.

Jalen Hurts, who did not start the game at QB, started the scoring for Alabama. He found ArDarius Stewart for a 40-yard TD.

After a field goal made it 10-7, Marlon Humphrey took a deflected pass back to the house for a pick-six.

That opened the floodgates, as Hurts found Stewart for his second TD of the game. This one was 71-yards and made it 24-3.

Hurts rallied from a fumble on his first play and his strong play continued. He had this nice scamper to make it 31-3.

But Hurts wasn't done, adding another TD run to make it 38-3.

But Bama kept scoring, with Bo Scarbrough getting some action.

Alabama apparently wanted 50, because Blake Barnett found Gehrig Dieter for a long TD pass. Barnett got the start, before getting pulled in favor of Hurts.

That was the final score in the win. All videos are from the Every Alabama TD Facebook page.