USA Today names Nick Saban as Coach of the Decade 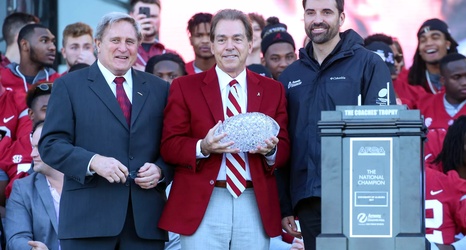 In terms of “Coach of the Year” awards, Nick Saban has been the victim of his own success. When looking at his entire body of work for the last decade, however, USA Today came to the only logical conclusion and tabbed him as their Coach of the Decade across all sports, meaning that he even bested his buddy Bill Belichick. From the article:

But despite coaching in an atmosphere of constant upheaval, Saban piled up the wins. Double-digit victories every year, and six seasons with only one loss. This year will be the first since the College Football Playoff began in 2014-15 that Alabama does not qualify.