Traeshon Holden is growing as “wow” factor at receiver for Alabama 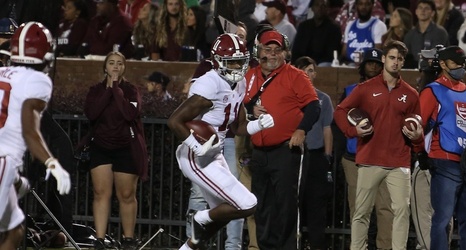 During its six national championship seasons under Nick Saban, Alabama football has always had a trio of marquee receivers.

The Crimson Tide carries a go-to option, a complementary target, and a “wow” factor at the position. Some of the best third options the Tide had at receiver include Dareus Hanks, Kenny Bell, Kevin Norwood, Christion Jones, O.J. Howard, DeVonta Smith, and John Metchie. Traeshon Holden, a sophomore, is emerging as the No. 3 option for this team at wide receiver.

A native of Kissimmee, Fla., Holden is tied for sixth on the team in receptions (11). He has received extended playing time for his work ethic and has 179 yards with one touchdown.